Chlorhexidine is a molecule that was first synthesised in 1950 as an antiseptic for the mucosas, the skin, and wounds, and used as a preservative in ophthalmic pharmaceutical formulas.

In dentistry, Chlorhexidine has been in use for over thirty years and is still considered the gold standard recognised worldwide for controlling plaque and preventing gingivitis. In fact, Chlorhexidine can not just break down the bacterial film, but also inhibits its formation and stratification. Moreover, it has a broad spectrum of action that makes it effective against Gram+ and Gram-, viruses, and mycetes; it has antifungal properties and does not induce bacterial resistance phenomena in the oral cavity. Lastly, Chlorhexidine’s plus points include substantivity, i.e. the property that allows it to remain bound to hard and soft tissues for 8/12 hours, thus making for long-term action and efficacy throughout the day. 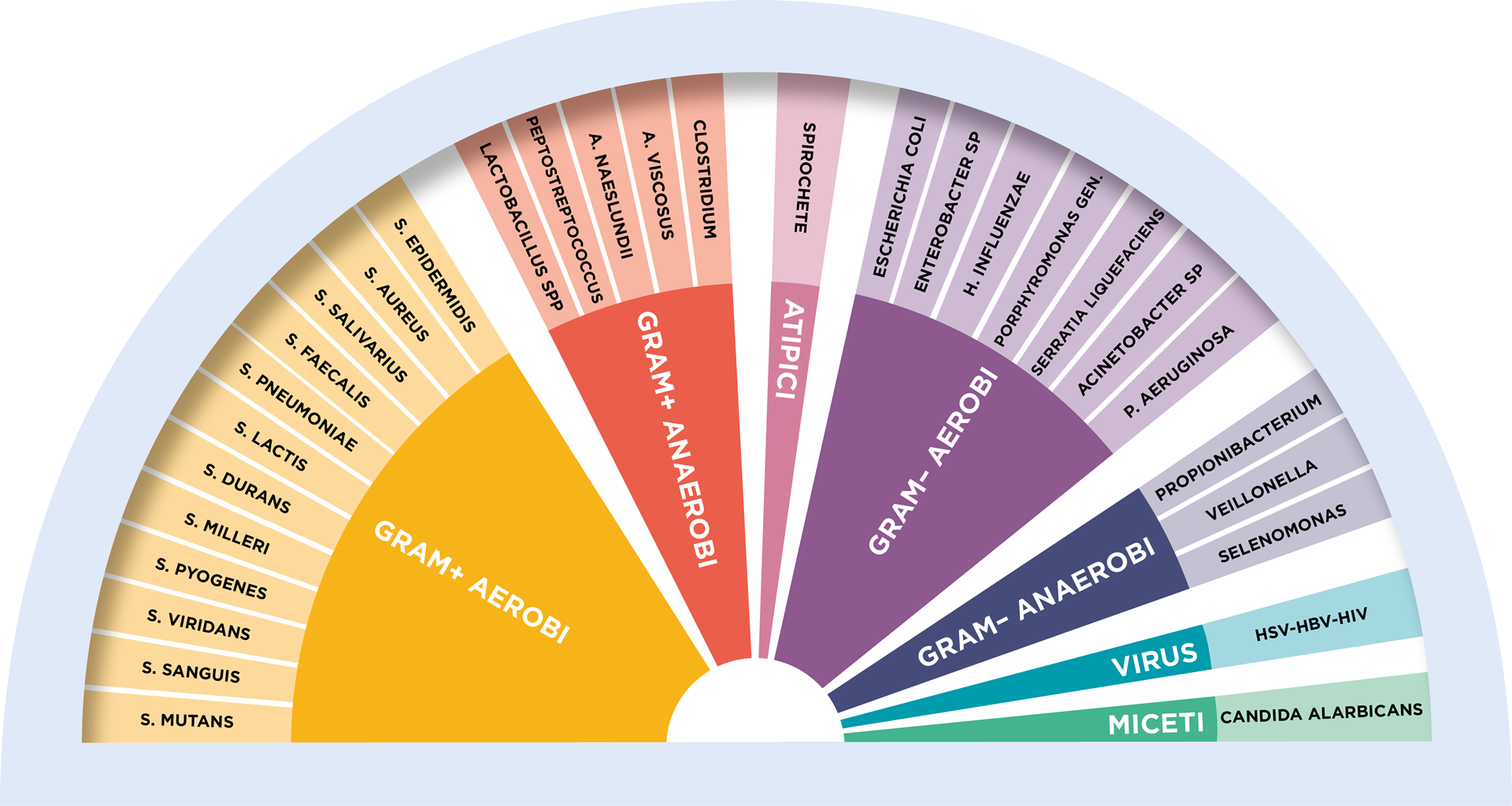 SIDE EFFECTS OF CHLORHEXIDINE

However, as well as many advantages, chlorhexidine has a tedious side effect: it triggers chemical reactions in the oral cavity that are responsible for the discoloration of the surface of the teeth, thus negatively affecting the patient’s compliance with the treatment. This aesthetic alteration has, in the past, led professionals to prescribe chlorhexidine with reservations, and has compromised compliance in the use of this active principle by the patients.

This is why the launch of Curasept ADS marks an epic shift in the history of oral care: a line of products which combine the effectiveness of chlorhexidine with ADS (Anti Discoloration System) that can limit discoloration, preserving the effects of the treatment. 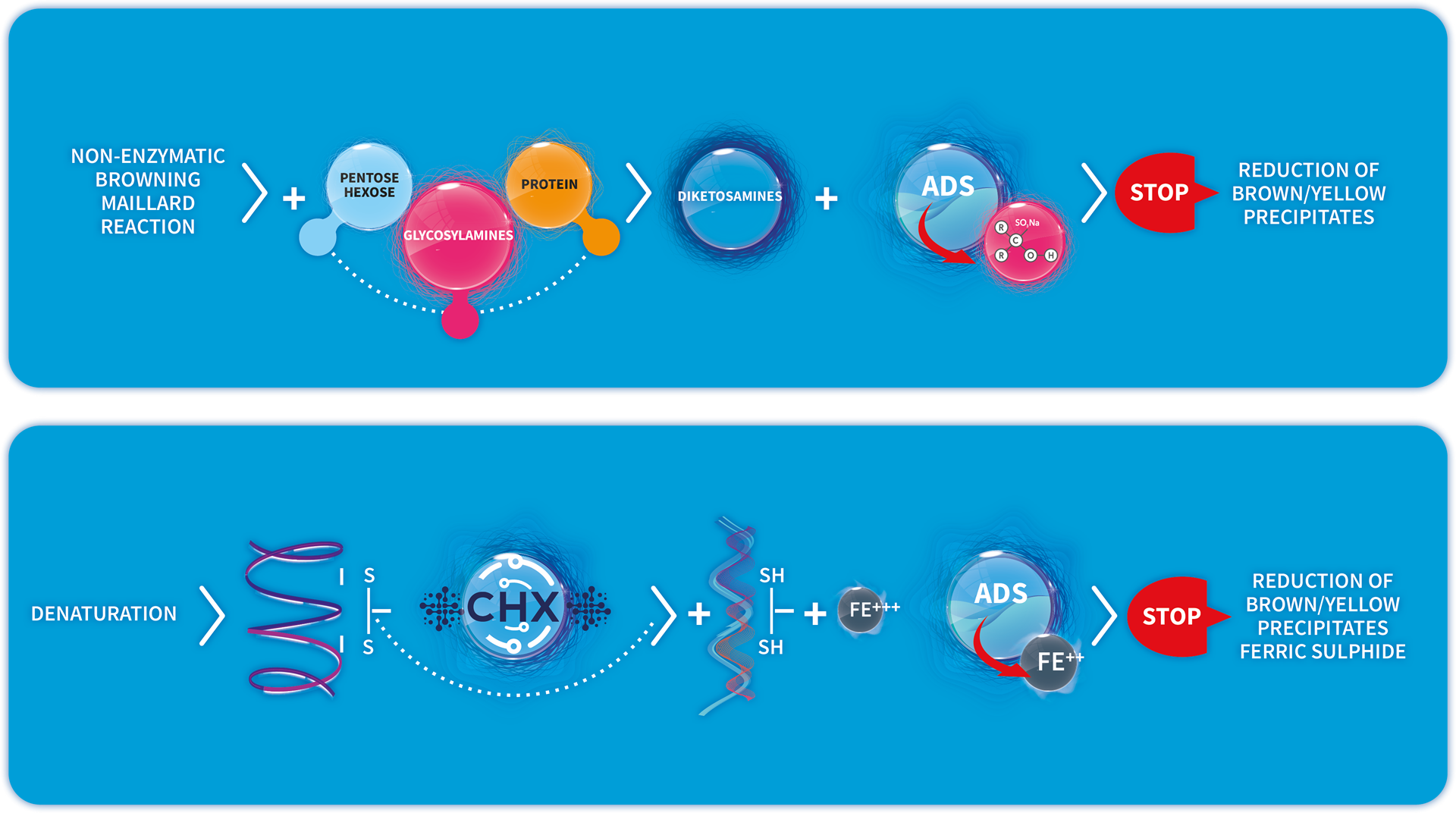 QUESTIONS AND ANSWERS TO UNDERSTAND ADS

Why should Chlorhexidine be prescribed with ADS?

ADS can drastically reduce the discoloration for which Chlorhexidine is responsible, without altering its anti-plaque and anti-bacterial efficacy. This important result guarantees better compliance with the treatment by the patient.

How does ADS act?

The main causes of tooth discoloration are two chemical reactions that are catalysed by Chlorhexidine inside the oral cavity: the Maillard reaction and the protein denaturation reaction. ADS, which contains Sodium Metabisulfite and Ascorbic Acid, intervenes by interrupting the sequence of reactions that leads to the formation of yellow/brown precipitates deriving from these reactions.

Does ADS reduce the efficacy of Chlorhexidine?

No: the success of ADS consists precisely in the ability to interrupt the chemical reactions responsible for discoloration, without interfering with the activity of chlorhexidine.

Are there studies that support the efficacy of ADS?

Yes, many. The results of the systematic review carried out with the goal of establishing whether the combination of Chlorhexidine and ADS is effective in reducing dental discoloration while maintaining the anti-plaque and anti-gingivitis action of Chlorhexidine were presented during the EuroPerio event that took place in Amsterdam in June 2018. The authors of this systematic review (Van Swaaij Bwm, Van Der Weijden Ga, Bakker Ewp, Slot De – 2018), which is the highest degree of scientific evidence: and concluded that the addition of ADS to a mouthwash containing Chlorhexidine significantly reduces discoloration and does not influence the action of Chlorhexidine in controlling gingival inflammation and plaque indices. This literature review suggests that the combined use of Chlorhexidine + ADS should be taken into consideration due to its effectiveness against plaque and in reducing gingival inflammation, which is combined with an anti-discoloration action.

Could other products interfere with the efficacy of Chlorhexidine?

Yes: when discussing Chlorhexidine it is important not to think just of rinsing with a mouthwash, but to also focus on the choice of the right toothpaste.
Many toothpastes contain salts, including carbonates, phosphates, anionic surfactants (e.g., SLS or SLES), excipients that bind to the two positive charges of the Chlorhexidine molecule, activating it and partly or totally compromising its efficacy. This is why it is important to choose a toothpaste studied to obtain 100% of the performance of chlorhexidine-based treatments, such as all Curasept ADS toothpastes.